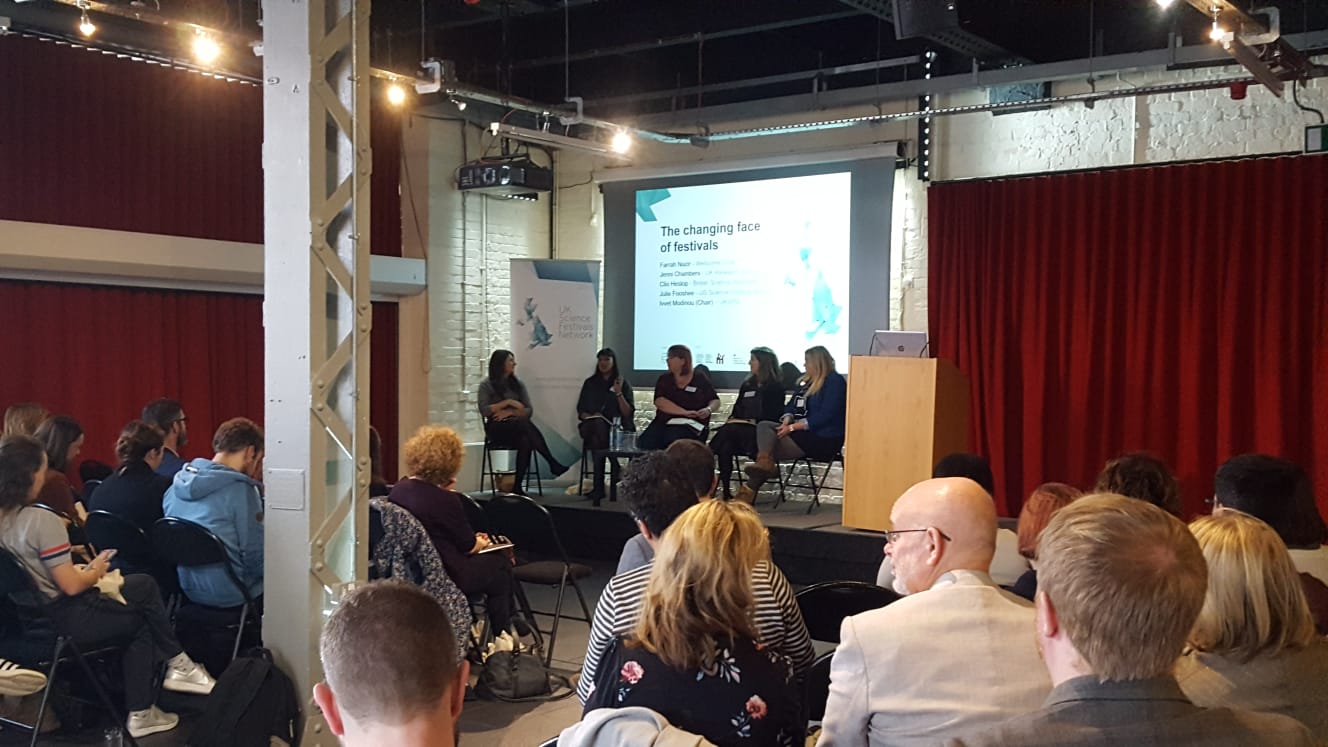 Following the success of the first UK Science Festivals Network conference in 2017, we re-lit the fire for our second. This time we visited the National Waterfront Museum in Swansea.

Science festival and event organisers from across the UK and beyond descended on the Welsh city, a place still riding on the accomplishments gained from hosting the British Science Festival back in 2016.

Attendees discovered the best ways to diversify audiences and speakers, joined workshops exploring new approaches to programming, and learnt about what else is happening in the festival sphere across the pond, amongst other topics. Most importantly, there were plenty of opportunities to network and socialise with other conference attendees.

This year, the programme was even more packed, meaning there were concurrent sessions and the chance for people to delve into the topics that meant the most to them and their work. Here, you’ll find an overview of what was discussed in each session, so even if you weren’t able to attend one (or the conference at all), you can get up to speed…

The opening panel introduced some themes of the UK Science Festivals Network activities during 2018, and set up discussions for the rest of the conference:

“AI (artificial intelligence) is making bad human decisions faster for us”: these are the hard-hitting words used by Alex to begin his session, where he took delegates on an insightful journey through his Masters research on racial bias in artificial AI. This naturally led to the ever-important point being made of the need to involve diverse perspectives when developing algorithms. This is an issue which is paralleled in the science engagement sector when developing programmes which appeal to a wide audience. He urged all science festival organisers to consider their role in communicating with the public.

If you’re uncertain about AI, Comuzi produced a helpful cheat sheet. Check it out. Ellie Runcie started by encouraging everyone in attendance to identify as “a designer”, mimicking the British Science Association, who believe that everyone is a scientist. She introduced the concept that “everyone designs who devises courses of action aimed at changing existing situations into preferred ones”. The Design Council do this by responding to national challenges such as housing provision, health and well-being, and accessibility of services. Additionally, design skills are increasingly essential to the way we live our lives – a Future of Jobs report by World Economic Forum predicts “creativity” as the third most-important skill by 2020.

The second half of the session introduced the double-diamond approach: engaging your customer, defining a problem, developing a solution, and learning from the delivery of the solution. The session closed with a practical exercise, where we worked in small groups to analyse photos of someone’s everyday experiences, and think about what could make their lives better. Conversation was sparked about how we understand, and often mis-understand, festival audiences, and how to keep learning from user experiences of science festivals. Jaclyn Bell detailed some upcoming anniversaries in 2019 in science and beyond, from the well-known Moon landing to the lesser heard of Sex Disqualification Act centenary and 150 years of the periodic table. Jaclyn opened the discussion to the audience who provided some other ideas, such as the national parks 70th anniversary and the centenary of the Forestry Commission, amongst much more. This session highlighted the importance for us to celebrate such anniversaries which have directly and indirectly shaped the science we communicate today. They also provide useful springboards for festival and event themes. This session was a series of discussions between science festival directors and other key organisations in the sector, exploring a series of questions: How and why do we evaluate our programmes? Do we enjoy it? How much does evaluation influence future programming? and How skilled do we feel as sector to undertake this work? It was a busy and vibrant session, demonstrating that evaluation is still a key area of interest and development for festivals. In the last section, Savita Willmott from Festival of Nature presented a programme they are undertaking with the US Science Alliance and EvalFest programme, exploring new ways for science festivals to communicate their environmental impact. Drawing on years of experience in the US science festival sector, Ben Wiehe provided a relaxed environment to discuss the challenges and thrills of starting and building a festival. Setting the scene as a “science festival agony aunt”, he answered questions from current and budding science festival organisers providing frank, but friendly advice. The main takeaway: science festivals are about the audience’s experience and you must be willing to adapt what you provide to their needs and requirements. There is not one size fits all model.

The US Science Festival Alliance provides some excellent resources to help new and current organisers, which you can find here.

Tamara Poles inspired audiences with her IMPACTS project which trains diverse scientists to deliver exciting educational programs and engaging the public in meaningful conversations about the value of STEM. She detailed the importance of targeted recruitment for underrepresented minorities, obtaining strategic partners whose goals align with the project’s, producing opportunities for different types of audience engagement, and providing Continuing Professional Development for those involved in the programme. The session finished with Tamara asking delegates to think about their audiences and who their ideal partners would be if they were to take a similar approach to IMPACTS, which sparked some lively discussions. Mikey Martins, Artistic Director and Joint CEO of Freedom Festival, shared some truths about the realities he has faced in building and running his festival. We focused on some of the techniques he has learned to ensure he is looking after himself and his mental health in what can be a very busy, tiring and stressful few months in the lead-up to the event. The audience also shared their tips and stories about self-care and building resilience in themselves and their team. People were so enthused by the discussion that it could have run on for much longer; it was great to see people opening up. The session really highlighted the importance of sharing experiences and supporting one another in the festival sector, something which the Network aims to foster.

Dane Comerford, Director of IF Oxford, recently embarked on coordinating a performance piece that toured many festivals in the Network. Here, in conversation with Laura Fogg-Rogers, he discussed his experiences and the distinct difficulties both science and art have in engaging the public. The take home message was that for science and art crossovers to work, they should be well thought through.

There has been increasing focus on involving young people in organisation’s processes, which has gone further than focus groups. Anna Woolman introduced the panel, emphasising the importance of having a youth voice in programming, especially if you want long-term engagement with them. The panel explored a range of ways to achieve this:

A key take home from this session, however, was that you should stay well clear of tokenism/exploitation of young people (e.g. using them as cheap labour). This is ultimately harmful for both the organisation and the young people involved. Kate Dale closed the day with an inspirational talk about the This Girl Can campaign, which she managed. Not only did the subject matter of getting more women involved with sport evoke a lot of passion amongst the audience, but it also highlighted the similar difficulties faced of getting ‘unengaged’ audiences involved with science. Delegates left the session enthused to see how learnings from the campaign, such as ways to involve those from otherwise ‘unengaged’ communities, could inform the science engagement sector. We were excited to see so many discussions resulting from the UKSFN18 sessions and want to thank everyone for attending and contributing.

A key focal point of this year’s conference was diversity, from race to gender and age. It is something that is increasingly talked about across the cultural sector. In science engagement, we’re in a position to stop simply paying lip service to it and start making changes. This is something that was key in the conference; the relevant sessions provided practical advice for improving diversity within programmes. If you are interested to see the work that the British Science Association, who manages the UKSFN, is doing in this area you can find out more here.

If you are interested in proposing a session for UKSFN19, we will be putting out a call for proposals mid-2019. In the meantime, please get in touch if you would like to discuss anything at info@sciencefestivals.uk. 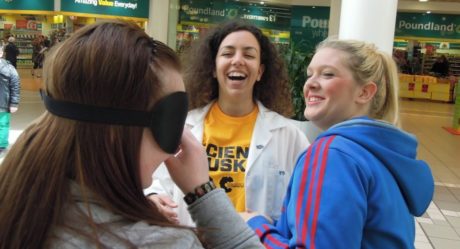 Science busking with the Royal Society of Chemistry 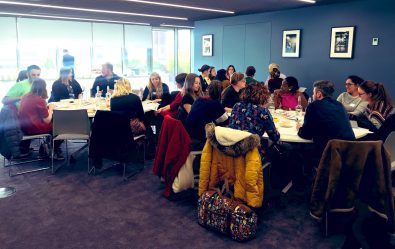